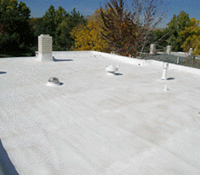 A cool roof uses special roofing materials that are highly reflective of the sun’s radiant heat. Cool roof materials have the ability to reflect the scorching heat from the hot sun back up into the sky instead of radiating it down into the building itself. According to the Cool Roof Rating Council (CRRC), the performance of a cool roof is a function of two radiative properties known as Solar Reflectance and Infrared Emittance. The ratios of these two properties together define how “cool” a cool roof product is. Both properties are rated on a scale from 0 to 1, where 1 is the most reflective or emissive equaling a more effective cool roof surface.

Cool roofs carry the misconception that the highest possible Solar Reflectance and Infared Emittance properties make sense for every cool roof project. This theory is simply not true. Different climates require different levels of reflectance and emittance and therefore it is vital to evaluate each building based on its geographic location before recommending the ideal cool roof material.

Typically, cool roofs are those with a solar reflectance value of 0.65 or higher when new. This means 65% of the total radiant heat energy is reflected back into the atmosphere. To achieve this level of solar reflectance on an existing roof, there are specialized cool roof coating materials which when professionally applied, can create a more reflective cool roof surface. A NIR Certified Roof Care Specialist can accurately examine an existing roof to recommend the most effective cool roof coating product and application procedure based on a thorough examination of the existing roof.

What is the Urban Heat Island Effect?

The Urban Heat Island Effect is the creation of higher ambient temperatures in densely compacted urban areas as compared to surrounding suburban areas. It is a direct result of reduced vegetative growth as well as a high incidence rate of black or dark colored pavement and roofing.

As much as 40% of a city’s impervious area is composed of roof area which is why cool roofs are so vital to help mitigate the Urban Heat Island effect. Impervious areas include structures such as roads, sidewalks, parking lots and buildings constructed with asphalt, concrete, brick, stone or even densely compacted soil. Large amounts of impervious material within an urban setting correlate to an intensified requirement for cooling energy, higher rates of air pollution and excess production of ozone.

Cool roof studies have shown that if cities were to install only cool roofs, significant energy savings would result as well as an improvement in urban air quality. These studies have led to local and state mandated commercial roof regulations which have increased the usage of cool roofs in urban settings.

Cool roofs are rapidly expanding to other locales that value cool roof products as a cost effective means to reduce overall energy consumption. Such programs as Title 24 in California and regulations in the State of Georgia, Salt Lake City, Chicago and other urban northeastern cities are examples of cool roof trends being adopted nationwide